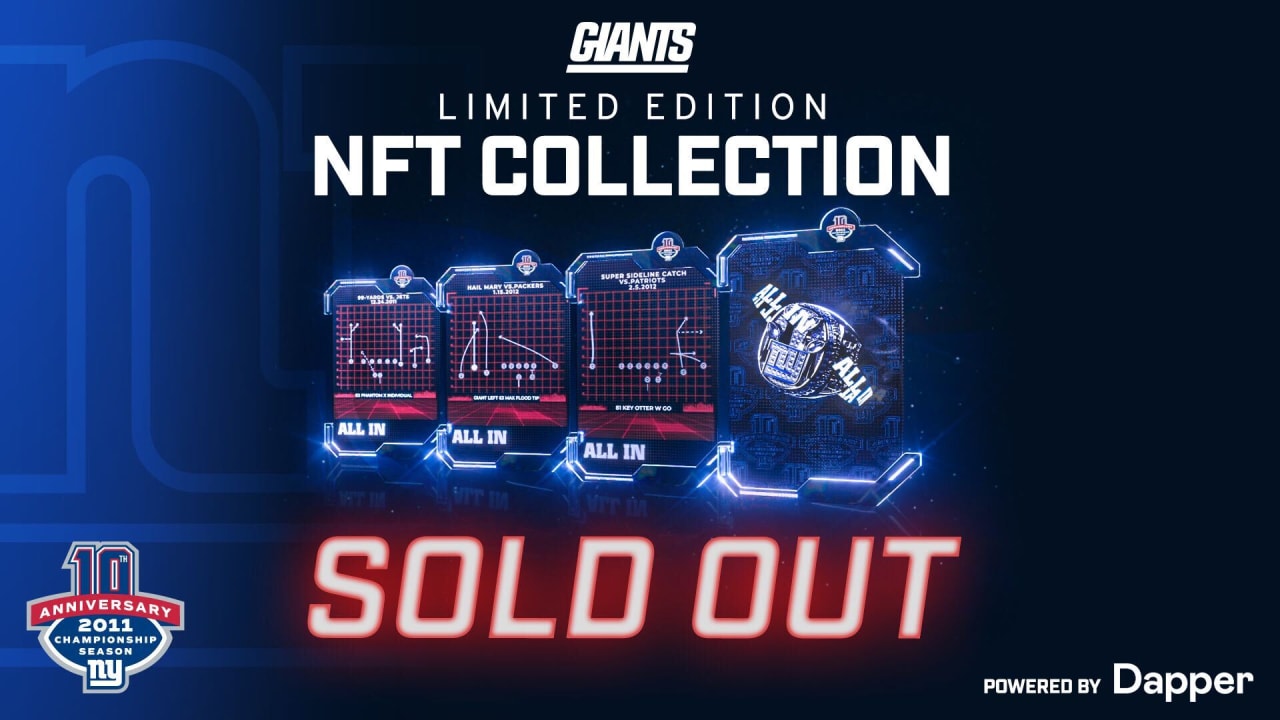 East Rutherford, N.J. The New York Giants and the NFL, in partnership with Dapper Labs Inc., are set to release four limited-edition collectible NFTs featuring three iconic plays from the team’s 2011 championship season, as well as the team’s Super Bowl XLVI championship ring. With the NFT collection, the Giants conclude their season-long celebration of that historic 10-year anniversary.

The limited-edition collection will go on sale today, Tuesday, February 8th, beginning at 12:00 PM ET, and will feature four unique NFTs, released one after the other, commemorating the iconic victory. To access the drops, fans can visit the Giants virtual pop-up shop at giants.nflallday.com, where they will be able to join the queue for a chance to purchase these limited-edition collectible NFTs from Dapper Labs.

“Dapper Labs brings a fan-centric approach to digital collectibles,” said Dave Feldman, SVP, Marketing at Dapper Labs. “Bringing these limited-edition, 2011 championship NFTs to Giants fans gives them the ability to memorialize their best moments, and once integrated fully with NFL ALL DAY, Giants fans can celebrate their team’s history with pride along with their entire NFL NFT collection.”

Regarded as the spark to the 2011 championship run, this 99-yard catch-and-run against the Jets gave the Giants a 10-7 lead going into halftime.

They never looked back.

After defeating the Falcons convincingly in the Wild Card Round, the Giants headed to Lambeau Field to face the top-seeded Packers on the road.

They knew they needed something special, and just before halftime, they got it.

A 37-yard Hail Mary touchdown gave the Giants a two-possession lead en route to a 37-20 victory and a spot in the NFC Championship Game in San Francisco.

The Patriots’ defense was advised not to get beaten by WR1 or WR2, and to force the play to WR3.

While the “Helmet Catch” is regarded as one of NFL history’s most improbable plays, this 38-yard sideline throw-and-catch was a masterpiece in skill and sparked the game-winning drive in Super Bowl XLVI.

Every season, 32 teams dream of being champions, but ultimately only one ever does.

Dapper Labs, the company behind NBA Top Shot, uses blockchain technology to bring NFTs and new forms of digital engagement to fans around the world. Since it was founded in 2018, Dapper Labs has given consumer enthusiasts a real stake in the game by bringing them closer to the brands they love, building engaged and exciting communities for them to contribute to, and producing new pathways for them to become creators themselves. Dapper Labs’ current studio partners include the NFL, NFLPA, NBA, NBPA, WNBA, WNBPA, LaLiga, Warner Music Group, Ubisoft, Genies, and UFC. Notable investors in Dapper Labs include Andreessen Horowitz, Coatue, Union Square Ventures, Venrock, Google Ventures (GV), Samsung, and the founders of Dreamworks, Reddit, Coinbase, Zynga, and AngelList, among others. For more about Dapper Labs’ products and mission, visit dapperlabs.com.

This is a guest post from the Flowns team. Flowns is a community-driven project, aimed at developing an open protocol for identifying users and...